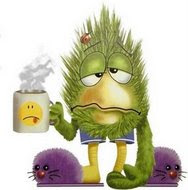 YOU CAN’T EAT, IF YOU WANT TO BLOG!

*
It’s true, you must choose….RIGHT NOW! Would you rather blog or eat? I now know, why they call our side bar…..A BLOG ROLL! The roll (around the middle) comes easily after viewing the sidebar.
*
It’s proven that:
Sitting makes you fat November 28th, 2007 by Donald Sensing ;ABC News reports.
*
When we sit, the researchers [at the University of Missouri] found, the enzymes that are responsible for burning fat just shut down. The researchers injected fat containing a radioactive tracer into laboratory animals and human volunteers. The radioactive tracer revealed that when the animals were sitting down, the fat did not remain in the blood vessels that pass through the muscles, where it could be burned. Instead, it was captured by the adipose tissue, a type of connective tissue where globules of fat are stored. That tissue is found around organs such as the kidneys, so it’s not really where you want to see the fat end up. The researchers also took a close look at a fat-splitting enzyme, called lipase, that is critical to the body’s ability to break down fat. After the animals remained seated for several hours, “the enzyme was suppressed down to 10 percent of normal,” [associate professor of biomedical sciences Marc] Hamilton said. “It’s just virtually shut off.”
*
So the simplest method of weight control, say the scientists, is to “stand up and putter” around.
*

WHAT HAVE WE LEARNED FROM THIS:
We cannot eat & blog! You must choose between the two of these passions.
You also must STAND & HOP on one foot, the entire time you are blogging!